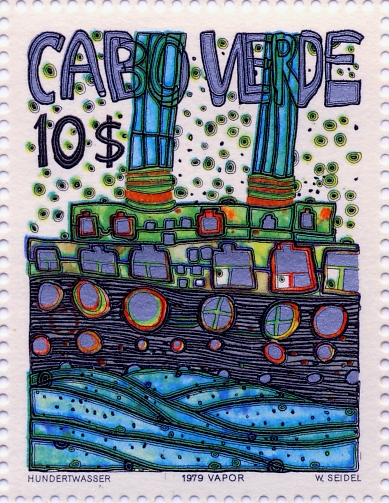 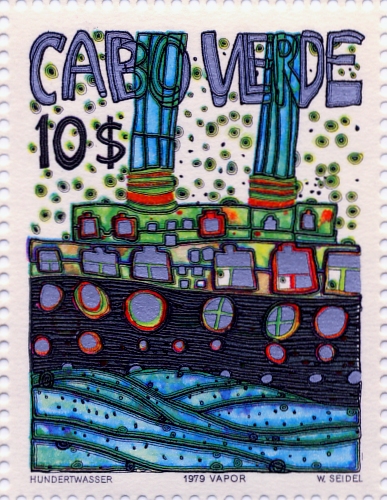 Hundertwasser created Vapor (the graphic on the stamp) in two variations - a light hull and a dark hull. I've never heard a satisfactory answer that explains why both went into production. Perhaps they just couldn't choose one - the light hull offers much more detail, but the dark hull has more weight and ship-like qualities.

Whatever the reason, Seidel engraved them and the Austrian Federal Printer printed the issue to be released on 24 April, 1982. According to Hundertwasser’s catalogue raisonne, the stamp was indeed issued as planned, but the price was too low to help the tiny island country of Cape Verde, so they were reissued three years later at a higher value. It’s worth noting that stamp catalogue authorities at Michel and Scott disagree and consider the 10$ version unreleased. Only Michel gives it a number, and it’s a number type that is reserved for unissued stamps (Michel III).

At least one first day covers was printed in 1982, however, and it’s pictured in the catalogue raisonne.

Interestingly, the dark-hulled $10 version was for years only a legend. No one had seen one. Since late 2009/early 2010, however, a few sheets have appeared on the market (one complete sheet and at least one broken up sheet). For many collectors, having access to both these stamps is astonishing. It was difficult enough to find a light-hulled 10$ Vapor. To have both now is for many a dream come true. Personally, I wonder whether the 10$ stamps we now have were actually printed in 1982 or 1985. That may be academic to most collectors, but having the answer might shed some light on some of the dimmer parts of this history.